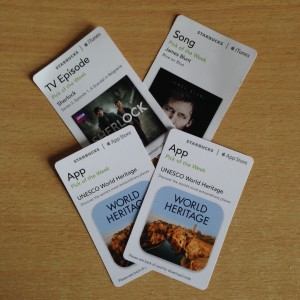 Good company? UNESCO World Heritage and other Starbuck picks of the week

Our app for UNESCO and Collins, the official UNESCO World Heritage app for iOS was a Starbuck’s Pick of the Week* last week.

This is another first for Aimer and though we gain little in financial terms, it feels good to see the one of our apps on the little piles of cards sitting in the perspex cases on the coffee shop counter.

It has been interesting to see the promo download numbers coming in day after day and though it is over they are still coming in – gratifyingly high numbers but then again a seriously large number of cards get distributed.

*This was officially the week starting the 20th January but cards seem to hang around a while so if you do want to pop into to a Starbucks nearby you may still be lucky.