On Friday we attended The Bookseller’s FutureBook Conference, held at Queen Elizabeth Conference Centre in London, where at the end of day the announcement of the FutureBook Innovation Awards took place in a room where many of the attendees had come to get a well-earned drink and others had come to see if they had won an award. 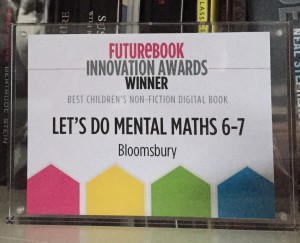 Aimer was up for two awards. First, we were up for the best non-fiction digital book with Mountain High app developed with Quercus Books but in the end the award went to the Collins Bird Guide from Touch Press. Then, much to our surprise and delight, we did win the award for best children’s non-fiction digital book for Lets Do Mental Maths 6-7 developed by us with Andrew Brodie and Bloomsbury – “credited with using the digital experience to take on a subject that was “hard to tackle””. 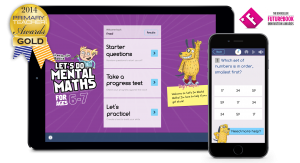 Anyone attending would have seen a clearly very surprised and bemused, Adrian from Aimer collect the award on behalf of Bloomsbury and Aimer. If he had been more composed and had even expected to collect the prize in this unlikely event, he would have said thank you on behalf of Aimer to Andrew Brodie for all the work he put into it, Helen, Emily, Emma and everyone at Bloomsbury for their support throughout and to the judges at FutureBooks for being so very kind in awarding us this treasured perspex block.